I was cleaning The Beast’s air filters this afternoon and I thought about the picture I took with the 5.56 AR15 inside the engine compartment of my slightly-tamer sedan. That picture was really popular in the gun world social media, because I made the point that the 450+ horsepower engine can push that car to more than twice the highest legal posted speed limit in the country… yet, no one was trying to take it away from me. At the same time, the rifle was a semi-automatic that fired a relatively weak round, but it was regularly demonized in the media and was derided throughout the non-gun-owning culture. I like cars & guns, and they are often compared. The caption on the first picture read something like, “Which one of these do you think I need? Hint: It doesn’t matter.” 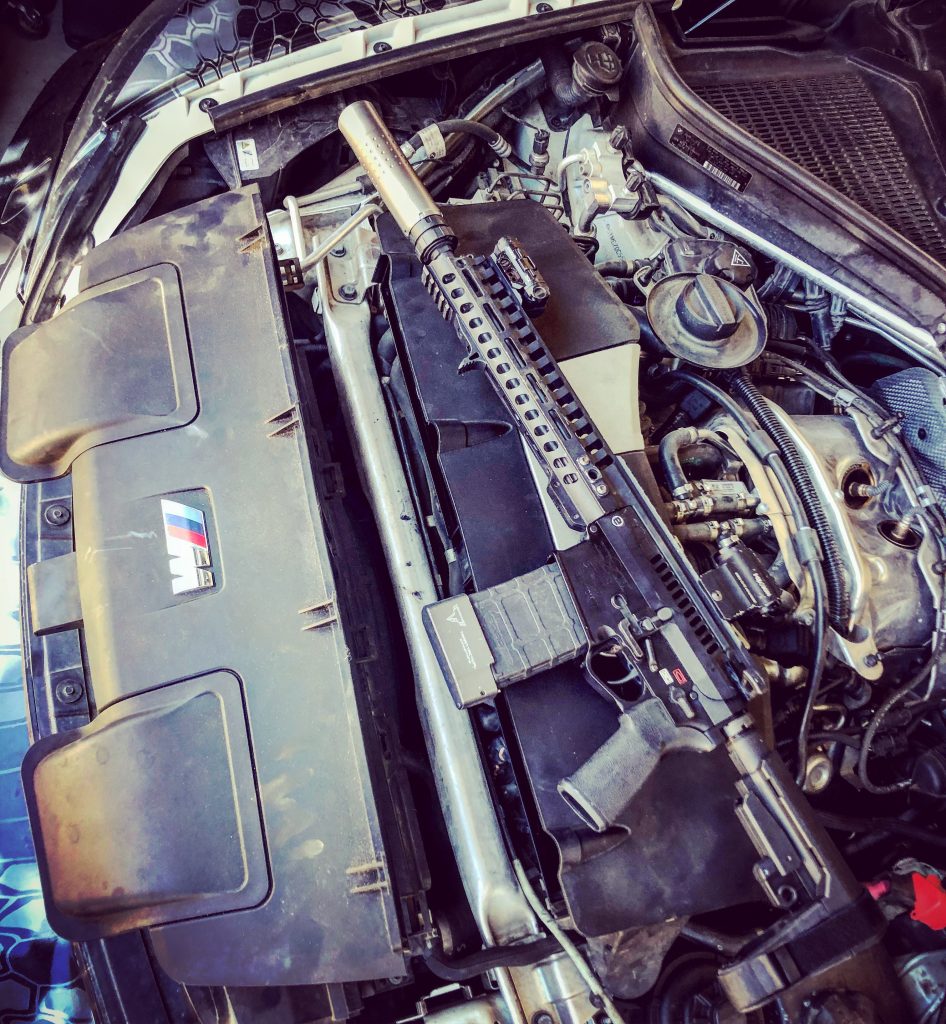 Well, the more powerful engine in my X6M deserves a firearm chambered in 7.62×51 to make the same point… and there is really a lot more that could be said on this topic. So, with thispicture as the backdrop, let’s talk about Guns & Cars:  licensing, training, power and need. This was the caption posted with the picture on Instagram:

I don’t need a background check for 555+ Horsepower and I’m expected to be responsible enough to have the judgement and skill to use it without hurting myself or anyone else out in the public space. There are no areas around schools where it is prohibited. I am unaware of any private businesses that have banned supercars from their lots.
But, the Suppressed & Braced .308 AR Pistol requires all kinds of hoops to be jumped through for ownership, isn’t even legal in some States. In some where it is, the magazine isn’t. In some the suppressor isn’t legal to own and in others it is, but the local law enforcement agency may not be inclined to approve it. In the country where the engine was made, the laser module on the gun isn’t legal to possess. In some States where I can legally own the rifle and all of its components, private businesses may chose to tell me that I can’t bring it to their property because of the negative stigma firearms and firearms owners have in our culture… while in more educated and affluent circles, this ridiculously overpowered vehicle is likely to be admired and maybe even get a nod of approval. And, of course, there are “gun free zones” owned and controlled by the Government all around the US (schools, courts, etc…). I’m not even able to use this firearm for hunting in many States, despite the round’s well established efficacy and the reduced environmental impact of the suppressor. And, of course, we know that more people are killed in Car Accidents than in Gun Accidents each year.

So, lets take a real look at issues of licensing, training and power in regard to cars & guns… [READ MORE about the validity of Comparisons about cars & guns in my extensive article at 2AO’s Website.]

Teacher, Author & Entrepreneur. Rob Pincus is the owner of I.C.E. Training Company, developer of the Intuitive Defensive Shooting Program (AKA "Combat Focus"), Executive Director of the Personal Defense Network and Vice President of Design at Avidity Arms. He has been a full time instructor for almost two decades and part of the firearms industry since 1997. He has taught various defensive topics around the world to military, law enforcement, & security personnel and those interested in personal defense. He has published 9 books, countless articles and produced over 100 Training DVDs. He has been featured as an expert on personal defense on dozens of TV and Radio programs and been a host or featured instructor in several seasons of shows including The Best Defense, S.W.A.T. Magazine TV and Trigger Time. Rob also serves as the Executive Vice President of 2AO.org, and is on the Board of Walk The Talk America and the Center for Gun Rights & Responsibilities.