Anyone who has followed my work in regard to the Right to Keep and Bear Arms knows that I’m not one to pound the podium and yell “Shall Not Be Infringed!“.

“Shall not be infringed” isn’t an argument, it’s not a discussion, it’s not a remotely compelling statement to make at someone who has already taken a Anti-Gun stance. Furthermore, it’s non-sensical to use it as a point to prevent further infringement of our rights. I don’t think anyone actually involved in the US Government or Politics has had a serious conversation about going back to “shall not be infringed” in almost a century. We are infringed. There was a series of decades in our county where our gun rights were eroded (infringed upon) more and more leading up to the 1994 Federal Assault Weapons Ban. At that time, the leaders of the firearms owning community in the US finally started fighting a real fight based on the Constitution and the right to own tools of Defense instead of hiding behind “sporting traditions” or “hunting” as justifications for individual firearms ownership. 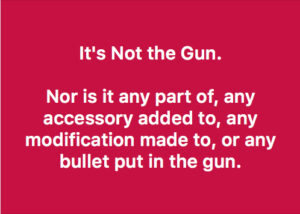 That started a twenty year push for the Right to Keep and Bear Arms that has reclaimed much lost ground. There is incredibly less infringement of our Concealed Carry Rights nationwide and Federal Courts have ruled in favor of our side in almost every case.

To open up a negotiation on restricting “bump stocks” or any other accessory or type of gun is to accept that some level of infringement is not only acceptable, but that gun owners will be complicit in its establishment. “Shall not be Infringed” is the starting point… the basis for all the arguments and the reason for discussions on gun rights. Give that up and we conceptually give up the Constitutional Basis for anything else we decide we actually want to keep or fight for.

We are on the precipice of another arbitrary set of regulations restricting our Right to Keep and Bear Arms that will do nothing to stop killers, tragedies, accidents or those with any criminal intent. Accepting the idea that a bump-stock was in any way responsible for a death last week isn’t simply being “reasonable”. Trading bump-stocks for anything isn’t a simple political compromise. Moving our baseline position away from “shall not be infringed” is tantamount to us setting up a Slip-n-slide on Capitol Hill and trying to walk down the incline without falling… with Bloomberg, Pelosi and a million well meaning but Misinformed Moms trying push, trip and shove us the whole time.

I have always taken the position that the “infringed” issue in the RKBA should be applied the same as it is in the cases of the 1st and 4th Amendment. Obviously, there are times when the government steps in, with the consent of the people, and infringes on an individual’s freedom because they have acted against the interests of the people. The problem with GCA/NFA/Etc. is that people’s rights are Infringed BEFORE they have demonstrated that they can’t be trusted to follow the law and Social Contract.

It’s not time to cave to emotional and political pressure, but it’s also not a time to over-simplify with rhetoric and the same old talking points. We need articulate arguments, reasonable discussions and Real Leaders willing to put in the work to not only defend, but also continue to regain our currently infringed gun rights.

Let me know what YOU think in the comments and, as always, SHARE and POST this if you agree… or even if you just want to get a discussion on the topic going. Now is not the time to sit on the sidelines.