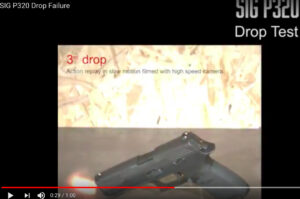 Last week, the dam started to leak around a Drop Fire issue with the Sig P320. It is always easy to dismiss the first indications of a problem like this to Operator Error or Internet Rumor… but, that is no longer possible with this one. Sig P320’s have a design flaw… but, I honestly think it was pretty obvious when the gun was first released: It should have a Trigger Block Safety.

People I know that are at Sig or closely aligned with them and their product development have assured me that they are On This. There are a variety of versions of the Dallas PD Restriction Story (and the one linked below is 6 days old) and this Document showing a lawsuit filed after a Stamford, CT SWAT Officer was injured when a dropped P320 discharged is making the internet rounds as well.  That one lists several alleged Drop Fire incidents involving the P320. Most compelling is the video posted HERE, with examples of the drop fires happening in controlled tests and an explanation of the exact circumstances and WHY they problem was probably not observed before the gun was released or during any of the standard drop testing that was performed internally or externally.  The video shows the issue clearly and is apparently being treated by Sig as legitimate. Another Video showing Drop Firing was posted yesterday. I’m sure that many more will follow. The dam has busted. 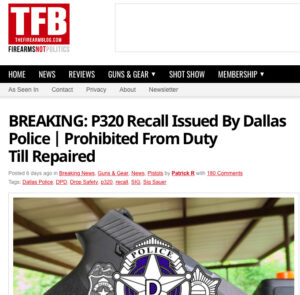 I have expressed concerns with the lack of a trigger block safety on this pistol since the first day I shot one. This is an issue that we have dealt with on the PD10 design also. Originally, I felt that the PD10 trigger pull was long and heavy enough to not require a tab style trigger block safety, and it probably is… but, we have decided to include one in the final production design as an added passive safety. The extra cost, effort an time delay on release are negligible when compared with the possibility of an accidental discharge if the gun were dropped at an odd angle that could’ve been prevented by the presence of that safety device. Sig is now dealing with a potentially massive recall and tens of thousands of people have to take pause before carrying one of these for defense or on duty. Going through the process of designing and manufacturing a defensive pistol has dramatically increased my understanding of these issues. Things look different from that perspective. Here is a very thorough article on safety issues surrounding Dropped Guns and the steps that manufacturers generally take to prevent Drop Fires.

One of the pieces of advice I give students during the safety briefing at the start of every live fire class is that if they have a serious issue they need to deal with while their gun is in their hand (hot brass inside glasses, bumble-bee in their pants, etc…) and they cannot safely holster while dealing with it, they should just Drop The Gun. Many instructors give similar advice… but, we now have reason to believe this would be reckless advice if the student has a Sig P320. Should we even let students use these guns in classes at this point?
Luckily, this is my month-mostly-off after the Training Tour and there is some time for more information to come to light before I will have to make the decision personally.
As many know, I have not yet added the P320 to the “recommended” list for I.C.E. Training Company despite its consistently demonstrated reliability in classes. It is an easy gun for many people to shoot well under range conditions when compared with other the most popular and proven striker fired options, primarily because of its trigger. My primary reservation has been the short trigger without trigger block safety, which seems to be a simple solution to the current Drop Fire concern. I believe the lack of this passive safety and the short trigger pull length also contributed to the negligent discharge that infamously occurred when an instructor stepped on a 320 in a parking lot awhile back to “demonstrate” that a gun is just a tool which can be treated roughly. Sig does have a tabbed trigger design for the gun already. Hopefully, the issue will be addressed and such a trigger will become the standard on this gun moving forward… and, when and if the drop fails are officially verified, Sig will address the thousands of guns currently out there with the original trigger.

I have no doubt that Sig Sauer has the best intention to address the issue and will do so as promptly as they can.

as of a moment ago, Sig Sauer has officially acknowledged the issue and is going to be addressing it. They say that they will announce their plan on Monday, August 14th:

The design of the SIG SAUER P320 overcomes the most significant safety concern in striker-fired pistols today: the practice of pressing the trigger for disassembly. This can be performed with a round in the chamber which has resulted in numerous incidents of property damage, physical injury, and death. The disassembly process of the P320, however, uses a take-down lever rather than pressing the trigger, eliminating the possibility of discharge during the disassembly process.

Recent events indicate that dropping the P320 beyond U.S. standards for safety may cause an unintentional discharge.

As a result of input from law enforcement, government and military customers, SIG has developed a number of enhancements in function, reliability, and overall safety including drop performance. SIG SAUER is offering these enhancements to its customers. Details of this program will be available at sigsauer.com on Monday, August 14, 2017.

The M17 variant of the P320, selected by the U.S. government as the U.S. Army’s Modular Handgun System (MHS), is not affected by the Voluntary Upgrade.

“SIG SAUER is committed to our approach on innovation, optimization, and performance, ensuring we produce the finest possible products,” said Ron Cohen, President and CEO of SIG SAUER. “Durability, reliability and safety, as well as end-user confidence in the SIG SAUER brand are the priorities for our team.”

For more information on SIG SAUER, please visit us at sigsauer.com.”