Skip to content
Officially: Sig P320s that are not Improved to the new factory specs (or otherwise modified to reduce Drop Fire Risk) may not be used in I.C.E. Training Company Live Fire classes.
This was not a fast decision, nor an easy one. I wanted to wait until the Official plan from Sig Sauer was clear. Now that it is, it is VERY clear to me that this isn’t something they are doing to placate an overly nervous portion of the industry or anything like that. You can learn more about their plan in This Article from Recoil Magazine.  This is a rebuild of hundreds of thousands of guns. I first addressed the issue last week, in This Article, but did not make the decision the ban the guns from classes until today after thorough consideration of the real risks to the students and other factors. 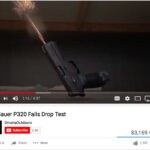 While their response to the safety issue is currently being touted as a Voluntary Program, I wouldn’t be surprised if this actually evolves into a more traditional “Recall” at some point. By the way, All manufacturer “recalls” are voluntary programs in regard to an owners participation. The only difference here is that Sig isn’t specifically advising owners Not To Use the pistols they currently possess because of the safety concerns. In the automotive industry, manufacturers are required by law to issue recalls in regard to identified safety defects, but they are still often call “voluntary” as well.

Right now, this is much more like how the Automotive Industry handles recalls. I’ve never heard of a manufacturer telling people to stop driving a car immediately, but some recall issues have been very serious.The fact is that people NEED to drive their cars everyday and the relatively low risk of an obscure failure doesn’t justify what it would cost a company to fund alternative transportation for hundreds of thousands of car owners. Somewhere someone does that math and quickly comes to the conclusion that 2 or 3 wrongful death settlements are cheaper than renting cars for a month for everyone who owns a Honda Civic manufactured between 2011 and 2013. The issue of whether or not car owners should be required to participate in recall repairs is one that is under debate.

In the gun industry, no one would expect Sig to provide an alternative means of shooting at a training class or competing in a local match. I’ve never heard of anyone suing a manufacture because they had to carry a different gun for a few weeks nor am I aware of a single case where a person had grounds to suggest that they lost wages or were injured in any way financially or physically by a traditional firearm factory recall. Can you imagine the litigation, expense and backlash if Ford acknowledged a flaw that compelled all F150 owners to stop driving but offered no funding of alternative transportation?
The Official Explanation for why this is happening, per the Sig Sauer Website:

Sig’s approach is something we haven’t seen in our community, but it isn’t completely out of product liability left field.

My concern is that it will encourage complacency on the part of current P320 Owners… and that’s where leaders, instructors, range owners and all responsible gun owners come into play. We need to police our own on this issue. Unless you are in a Armed Professional position and issued a P320 with no other alternative being offered (which at this point would surprise me), you don’t NEED to carry a P320. You don’t need to shoot a P320. You don’t need to have a loaded P320 staged for defense in your house. You certainly don’t need to bring that gun to a class and subject yourself or anyone else to even a really really really small risk that a manufacturer’s acknowledge design weakness could cause injury or death. Yes, I am aware that firearms training carries inherent risks… I talk about it at every class. Allowing that risk envelope to include a gun that a manufacturer is spending tens of millions of dollars to fix a flaw in can’t be justified by the fact that we accept other reasonable and necessary risks. My advice to all instructors, range owners and others who have influence on this issue to that they should push P320 owners to do the right thing and take Sig up on their offer to fix the gun. For what it’s worth, this policy extends to all non-drop-safe pistols and that isn’t anything new. I check or ask about 1911’s and any modified modern guns in my classes.

As I said in several other posts, I am very impressed with the speed with which Sig Sauer has responded to this issue being identified and trust that they are managing the situation with a sincere intent to meet their responsibilities. It has been suggested that they may have known about this issue long before the compelling videos were made public, based on the fact that the rebuild being offered could hardly have been completely thought out and designed in the few days between their first acknowledgement and yesterday. It is possible that the “rebuild” is actually a design that was tabled during the 320’s development process that happens to solve the drop fire issue. That could’ve happened for any number of reasons from profit margin, to parts availability to subjective issues like trigger feel. I’m willing to give them the benefit of the doubt on this one and I’m anxious to see what the new trigger will feel like.
***UPDATE***: Hear my explanation for this decision and some deeper thoughts on the issue of  “standards” in the last half hour of the August 16th Armed American Radio show.
If you own a P320, you can get registered to have your pistol rebuilt HERE. If you are planning on attending a class in the near future and do not have an alternative pistol to use, contact me or the course host and I am sure that arrangements can be made to provide you with a suitable alternative.
-RJP

2 thoughts on “Sig P320s banned from Live Fire Courses… and WHY.”