The following is an Excerpt from my most recent article at Personal Defense Network… you can read the complete version here: The Importance of  Monday Morning Quarterbacking.

There is no replacement for experience… or is there?

In his book on Combat, Lt. Col Grossman coined the term “Pre-Battle Veteran” to refer to people who had been through highly realistic training that gave them similar experiences to actual veterans of conflict so that they were acclimated to the stress of battle before they ever actually experienced it.

The entire Reality Based Training movement is based on the idea that we can learn during high level scenario and simulation in ways that prepare us better than any other for actually using defensive force during a fight. From the medical profession, to pilot training to teen’s learning how to drive, simulation  is a very well established method of learning.

But, how are the scenarios and simulations developed and scripted? By its very nature, valuable “reality based” training has to be rooted in things that either have actually happened or are plausible for the students involved. This is pretty well accepted in the defensive training community. No one would question the idea that we should prepare for things that have happened repeatedly to others in the past. When we put a student into a scenario, allow them to experience the events and perform various responsive actions, the next step for those participating in the events is really the most vital: The “after action review” or debrief or, more simply, the discussion of what happened during the scenario is really where the best breakthroughs in understanding often occur. Again, these things are pretty self-evident and widely accepted by professionals and lay persons throughout the community.

Yet, far too often, taking advantage of the huge opportunity to learn from actual events is scoffed at or even met with scorn and derision. Why?  Ego. Emotion. Fear. Sensitivity. Misplaced sense of “respect”.  There are many reasons. Most people don’t want their actions to be judged. Many people don’t want the responsibility of judging the actions of others. 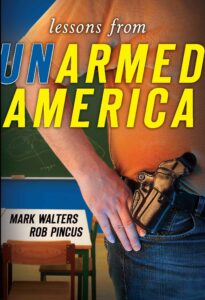 Later this summer, my latest book will be released. It is a team effort with Mark Walters, host of Armed American Radio, entitled “Lessons from Unarmed America”.    The book is built around a collection of actual incidents that involved violence. Mark Walters does a superb job of narrating the events and sharing with the reader the best information we have about various aspects of each situation. My entire contribution is Monday Morning Quarterbacking. What was the actual problem?  What could’ve been handled differently by the victim (especially in the timeframe leading up to the incident itself)? What lessons can we learn and how can we prepare to deal with a similar situation in the future. Some of the events that we cover are relatively high profile in our community, including the killing of Nikki Goesser’s husband and the attack at Luby’s Cafeteria that Suzanna Hupp survived. One of the most important parts of the book for to write was the introduction, because I know going into it that many people will be sensitive to the judgements being made about the actions of the key players. In fact, I actually hesitated to participate in the project because of those sensitivities. Ultimately, the greater good is in having the discussion. The greater good isn’t in writing the book for the victims… it is in writing the book in the hope that we can keep someone else from being a victim. That is the value that comes from Monday Morning Quarterbacking.

When it comes to violent conflict, I think it is much better to learn from the experience of others than to have those experiences ourselves… that’s a replacement that everyone should agree is a good trade.

1 thought on “The Importance of “Monday Morning Quarterbacking”…”