I have, almost exclusively for the last decade or more, carried stock guns. With the exception of a Grant Cunningham worked S&W 642, the only carry gun I’ve counted on has been a factory gun, in the same condition as tens of thousands of others… maybe a little dirtier. In the case of Glocks, I have generally added an extended magazine release, but that’s about it. No fancy coatings, no engraving, no aftermarket triggers or barrels. Over the last couple of years, as I switched from .40 to 9mm as my preferred carry round, I have used aftermarket barrels to convert a Glock 23, 22 and 27.

But, a couple months ago, I decided that I did want a custom carry gun. After years of avoiding this option… and usually mocking those that did obsess over changing perfectly good factory guns as “gun geeks”, I was hankering to return to my roots as a pure Gun Geek myself.  Back to the time I built my own 1911… or they time I commissioned that Caspian Meltdown in .40 from Clark Custom Guns…. But, (this time, at least) I didn’t want it to be custom for cosmetic reasons, nor did I just want it to be “special”. After seeing a friend’s .45 Glock that had a full size slide with a compact sized grip, I decided that I wanted to do that with a Glock 19 sized gun, to give it a 26 sized grip. You see, the problem is that I am kinda scrawny. I prefer to carry in the appendix position and I don’t wear big jackets most of the time and wouldn’t get caught in public with a tacticool concealment vest. That means I need to conceal with a t-shirt, polo shirt, light jacket, sports coat or maybe an untucked button up most of the time. I find that the grip of a medium sized Glock prints pretty noticeably at times in my preferred carry position and in my preferred style of dress. 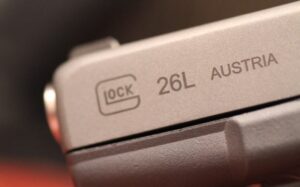 I also know that I can shoot a Glock 19 sized gun faster than I can shoot a Glock 26 sized guns. So, the question I had to ask was “How much of a factor is the grip size in being able to shoot the 19 faster?” Clearly, the extra weight (and the fact that the weight is out further in front of the hand) of the 19 frame helps to manage recoil. With that factor alone, a cut down 19 was going to be capable of being shot faster. There is also the fact that there would be some marginal increase in muzzle velocity with carry ammunition from the slightly longer barrel and some increase in potential for deviation control because of the slightly longer sight radius. To be honest, I consider those two factors to be poor reasons, on their own, for this modification.

Step One: Compare the Feel of the grips independent of the slide weight.

I took the slides off the frames and compared the feel of the mid-size Glock to the small frame. Now, I’ve done this incidentally for the 15 years… but, this time I was doing it with a real focus on how much of a difference the extra real estate on the grip was going to make in isolation.  I decided that there was definitely a difference, but it wasn’t huge. I wasn’t comparing a full size M&P to a Baby Browning. I can’t get my pinky finger on the Glock 26 sized grip, but, unlike a single stack sub-compact, the grip does fill the hand well and I can get significant contact with the weak hand to increase recoil management.

Step Two:  Compare the weight/balance of the Glock 19 and the Glock 26

The weight difference between the two guns is only one ounce. The difference between the two is right around 5% of total (unloaded) weight. So, that is meaningless from a practical perspective. What matters, however, is the location of that extra 5%. It is almost all located out in front of  and above the hands. The extra inch or so of plastic grip length weighs almost nothing, of course… it is the extra slide and barrel length that make of the difference. this means that while the weight difference is very small, the effect on balance is more tangible. Factor in the reduction in capacity that will come from using Glock 26 sized magazines and the balance of the chopped 19 when loaded should be noticeably front heavy…. which is a good thing if we are worried about rapid strings of fire. And, we are.

Okay, that might not be your Step Three, but it was mine! I happened to be teaching at the Firearms Academy of Seattle when I

finally decided to go ahead with the project. I had acquired a used Glock 23 and Marty Hayes has a well stocked tool room…. so, THIS Happened. In case you don’t have the time or ability to watch the video, I’ll sum it up:  I massacred that grip with the Dremel. I’m not a craftsman …(that was an understatement).

I headed to the range, conveniently adjacent to where I massacred the grip with the Dremel Tool, and found out two things:  The gun worked fine, it felt faster than a Glock 26….. and, I had ruined it. Turns out that I hadn’t accounted for the necessary “extension” on the back of the grip on the small guns. Without it, the base of the magazine hits the palm of the strong hand instead of dropping free on reloads. While I would be quick to admit that a reload is unlikely in a defensive shooting and also that I quite often carry without a spare magazine when just wearing a t-shirt & jeans, this was an unacceptable mistake. Magazines that reliably drop free are a requirement on a modern defensive semi-automatic. So, while the gun shot very well and concealed as expected (the same as a Glock 26 in the appendix position), it was going to need more work.

Step Five: Call in the Professional. 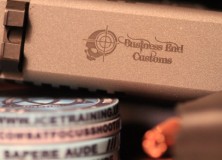 introduced to Lou Biondo at SHOT Show last year by CFS Instructor Matt Devito. Lou immediately struck me as a great guy and he had repeatedly expressed interest over the past several months in working on a gun for me. As I said at the beginning of this article, however, I am not really a big fan of custom carry guns… preferring the reliability and simplicity of stock. Until Now. I knew Lou and I knew Lou’s work. I also knew that  after Lou fixed my goofed grip, he could coat the gun in some magic material and I could pick any color I wanted. I wanted gray. Gray is the new tan. Gray is the new Zombie (…Zombies are DEAD, in case you didn’t get the memo yet). Gray is also the color of the world… as much as people want things to be black & white, the world I live in is shades of gray. I like gray and I wanted Lou to make my first custom carry Glock  gray…. and, I knew he could.
As luck would have it, the timing of my finally getting around to sending my gun up to Lou at his Business End Customs shop coincided with the first run of production spec Claw Emergency Manipulation Sights… the first product that I have ever designed and brought to market. Things were coming together nicely! 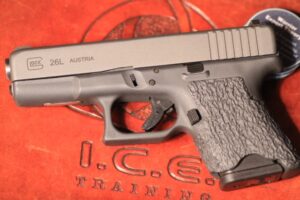 So, earlier today, after a redeye flight back from teaching on the west coast, I drove over to the shipping office and picked up my package from Lou. Opened the box in the car and saw that the gun I had imagined had come to life. Outstanding repair/improvement on the Glock 26 sized grip, excellent smoothing work on the Glock 19 sized slide. The gun wears the very first installed set of Claw Sights with my preferred Ameriglo Front Sight and, of course, it is gray… shades of gray, actually; the frame darker than the slide. A reminder to avoid absolutes and exude temperance when possible. The icing on the cake?  The laser engraved “26L” designation that I had begun using in conversation for this combination of grip & slide lengths. After feeling the gun in my hand and admiring Lou’s work I thought ever so briefly about clearing the Glock 26 I was wearing AIWB, loading the 26L and proceeding to carry it while running a few more errands. But, I didn’t. 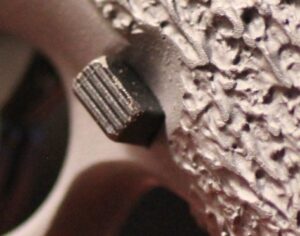 Step Six:  Never carry a Defensive Firearm that you haven’t tested… no matter how awesome it is.

Time to be a big boy and actually follow my own advice. I have often given students, friends and even random acquaintances grief for getting a shiny new gun, loading it, sticking it in a holster and then relying on it for personal defense without actually testing it. I’m not just talking about “function testing”, I mean really running the gun through its paces. A couple hundred rounds of practice ammo, with rapid fire and reloads. Some higher level precision shooting to verify sight alignment and, of course, a 50 rnd minimum 100% reliability check with the intended carry ammo. So, the gun went back into the kernels of styrofoam and I went on with my errands, well armed with a gun I knew to be reliable… if not nearly as cool as the Gray 26L.

I am hoping to have some time to run up to Black Wing Shooting Center tomorrow and get some range time with what my become my favorite carry gun. If I do, I’ll shoot some video and you can hear all about the gun, and it’s performance on my Youtube Channel soon!