There has been a lot of talk about airsoft guns over the last week since the tragedy in Santa Rosa, California. While we do not have all the facts we need to be able to judge the actions of the officer involved in that shooting  (and we may never have them), we can learn some very important lessons from the situation and take this opportunity to address safety in regard to airsoft replica guns and firearms education for children in general.

I have a long history with Airsoft Replica guns. As a kid, I owned a couple of the very first “Softair” replica’s available. These guns were 1:1 replicas sold by Daisy . There is a great write up on them inside of the is article on Air Pistols at Mr. Guns Place. These plastic guns actually had cartridges into which you loaded the airsoft pellets and then loaded into the cylinder or a magazine. If anything, they were more realistic in look and operation than the replicas that I have seen in the hands of kids these days. They were also conspicuously missing the Orange Muzzle that is now a required safety feature on these toy guns. I grew up playing cops & robbers, laser tag, paintball and playing with the early airsoft guns. I also grew up shooting real guns. I had ping-pong ball shooting guns, cork guns, cap guns of various designs, rubber band guns and Nerf guns. Sometime in the early 1980’s, I was playing airsoft with my uncle around an apartment complex. Apparently, someone got the idea that people were chasing each other with real guns through the neighborhood and, long story short, my uncle ended up in handcuffs and I was somewhat out of breath by the time I got to my aunt’s! Luckily, the misunderstanding ended at “choose your competition field more carefully next time.”
A lot has changed in the last 30 years in regard to the way both kids with guns and guns in public are perceived in our society. It is fair to say that law enforcement has changed quite a bit in that time as well… understandably so, given the

street war that some of America’s law enforcement is engaged in around the country. Regardless of how we feel about those changes emotionally or politically, we need to accept them as reality and deal with our children and guns in a pragmatic way.

In my early teens, I had access to both the Daisy Softair Model 04 replica of a S&W Model 19 and an actual .357 Magnum Model 19. I could equally utilize either, at my own discretion. I understood the difference and managed the responsibility… but, I was also a lifelong shooter, introduced to shooting at a very young age. I knew the consequences of miss-use and I very much knew the difference between the real thing and the replica. I am not sure that is the case with today’s middle-schoolers.

While there are groups of adults around the world that play sophisticated war games with airsoft equipment, this evolution of  “The Survival Game” isn’t what most of these unsupervised kids are doing.

Just a few weeks ago, my girlfriend and I had to confront the issue of her 13 year old son playing airsoft with his friends around the neighborhood. We chose to not allow him to attend a late-night airsoft game that was taking place after a birthday party on a Friday Night. He wasn’t happy, but, based on observations of how the kids treated the guns, the safety issues and their observation of the admonition to stay within the fenced boundaries of one family’s home, we decided that the event wasn’t in line with our thoughts about interacting with guns, even toy guns. At no time had we factored in the idea

that one of them could be shot by a local cop. We later found out that the local police did need to interact with the boys that night… after midnight, in an alley near the home where the party had taken place. A couple of weeks later, we saw the news about Andy Lopez. Rather than feeling vindicated, we both were more worried and talked about trying to spread some education amongst the community. We live in a rather peaceful suburb… but, had the same event happened just a mile or two away, in a worse part of the city, the police response may have been very different. In fact, it may have been much more like what happened in Santa Rosa. “Kids with guns in the alley” cannot be dismissed as “Oh, they’re just playing cowboys & indians” in 2013 America.

One of the challenges we face is that the community we live is also a bit left leaning… it is fair to say that the PDN Tour Truck sticks out like a sore thumb amongst the Volvos and Minivans on our block. We also know that firearms ownership, much less firearms use and being identified as “shooters”, is the exception in our part of the world. It is a bit ironic that the same parents who would hesitate to let their kids accompany ours on a trip to a real gun range to learn about firearms safety & operation have no problem letting their kids run around the streets at night with replica firearms. No doubt, these kids also watch the same violent movies and play the same violent video games that I would be much more likely to restrict a ‘tweener from than I would forbid them from going shooting or handling a real gun properly. This, to me, is the first level of the serious problem we have: Kids are not being educated about proper firearms handling & safety. I have stated many times before that I believe this education should be part of American Life. Just as we educate our kids about fire, pollution, sharp objects, drug abuse and safe sex, we should absolutely be educating them about firearms. It has always befuddled me that the US Educational System can deride firearms as unbelievably dangerous, yet refuse to allow children to be taught how to deal with the dangers involved. Step one for parents considering letting their kids have Airsoft Guns: Get them a real education on the proper respect, handling and operation of actual firearms. I believe strongly that putting guns in a proper perspective will help kids understand why Airsoft Guns need to be handled differently than remote controlled cars or team sports equipment. I am not a fan of teaching real gun safety with toy guns that will be pointed at their friends 10 minutes later.

Parents, you’ve got to parent! Don’t let your child dictate what is acceptable and what isn’t. Don’t worry about what other parents in your town are doing and certainly, don’t worry about your kids’ cool factor. Mistakes with airsoft guns can get your kids killed. With that said, I suggest the following rules for Kids & Airsoft Guns: 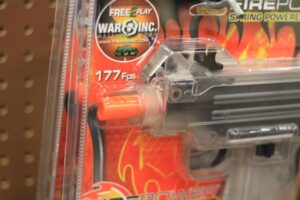 1. Orange Tips MUST be required:
Not only should the orange muzzle tips that these guns come with be maintained, I would suggest adding some orange to the stock as well. We all know that part of the experience of the game is to have specific guns that represent real ones… but, these guns need to be handled off the playing field and in front of people who don’t know what is going on as well. Parents, you might want to double check your own kids guns. Upon inspection, we found some that had much of the manufacturer’s orange tip covered with black tape… allowing a child to disingenuously say “yes” to the simple question “Does your airsoft gun still have the orange tip?”

2. Case the Guns when not being used

When kids are moving their airsoft guns from home to a playing area, they should be cased. This one simple step would probably have kept the situation in California from ever developing. Certainly, even if the replica had been in a rifle case and the case itself had aroused the suspicion of the officers involved, I can’t see how that would have lead to a shooting.

3. Have a Referee / Safety Observer

All Airsoft games should have someone clearly overseeing them, wearing an orange safety vest and the proper protective equipment. Preferably a parent. Not only can this person enforce the rules of the game itself, but their presence would do much to quell any concern from a casual observer. If you were to look outside and see two people ducking behind cars with guns right now how would you react? What if they were being observed by someone in a paintball mask wearing a blaze orange hunting jacket? If nothing else, If the police were ever called to the scene of a game, this safety observer would be much more aware of their presence than someone engaged in the game and much less likely to react inappropriately to their commands. Even if this observer is one of the kids who rotates in and out of the game, it is better than having everyone involved carrying a gun and focused on the tactics of winning the game and oblivious to what is going on around the game.

4. Play in a Controlled Environment

Airsoft isn’t the type of game that should be played randomly across neighborhoods.  Despite how cool it seemed like it would be in 1985 to wander a college campus with a paintball gun and no eye protection stalking your friends as they tried to meet nice ladies and shooting them while yelling “Gotcha!”… that’s a pretty obvious recipe for disaster. At worst, you get shot with a real gun by someone who doesn’t know what is going on. At the very best,the kids will just annoy people in the public space. Somewhere in between, they might take a bystander’s eye out because the pellets are flying in the direction of people who aren’t part of the game. And, this never leads to dating Linda Fiorentino. High fenced yards, out in the woods, on competition fields being operated for this purpose, at a private farm, in one of the parents’ warehouses… anywhere but in the public.

Not only will the proper equipment do the obvious, keep people from loosing an eye or choking to death on a pellet to the face, wearing a paintball helmet may very well be the deciding factor in how people who happen to see the game respond to what they see. Certainly, a police officer who sees kids with paintball helmets and guns is going to have a very different initial response.

Airsoft guns are hyper-realistic in regard to their appearance. It is completely reasonable for someone (police officer, concealed carrying citizen, security guard, etc.) to mistake them for the real thing. That is a fact.

At least for now, let’s table to the “Militarization of the Police” rhetoric and the  RKBA Utopian “I wish guns in public were more commonplace” Naiveté… let’s focus on the safety of kids.  The use of Airsoft Guns needs to be controlled and kids need to be educated about firearms safety and operation.