Over the last couple of weeks, I’ve broadcast several live training videos through PDN and my own social media accounts. LIVE Video has become a great way for us to reach the PDN Audience with relevant information and “live from course” demonstrations or discussions. Check out some of the recent offerings, including Reality Based Training concepts for live fire sessions, Shooting Skill development discussion with one of the best competitive shooters on earth and a demonstration of SAFE & Efficient presentation from the holster in a vehicle defense situation. We’ve been using Google Hangouts, Periscope and Facebook Mentions to facilitate these broadcasts. As you can imagine, the technology to bring live training videos, especially straight from actual classes, opens up a plethora of opportunities to share important imformation in a timely manner or in situations that a traditional production route can’t support. It also tends to be a little more casual and open up unexpected variables in a way that our normal video shoots simply don’t allow for… which can make them as fun and entertaining as they are educational! 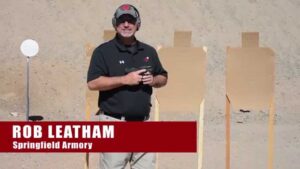 On a recent PDN LIVE Event, Rob Leatham (one of the greatest competitive shooters of our generation) and I had a chance to respond to questions about Defensive Shooting Skill Development. Rob Leatham is regarded as one of the best shooters on the planet, but many interested in defensive skills are quick to dismiss advice from those who participate in choreographed competitions. Similarly, people steeped in older approaches sometimes question the training methodology that I espouse for defensive firearms training. During this enjoyable hour of conversation, the PDN Audience learned that the the two of us have much more in common than many would think. Leatham has spent a considerable amount of time training military professionals and others interested in practical defensive skills and my team of Combat Focus Shooting Instructors been training military, law enforcement and responsible gun owners using an intuitive approach successfully for almost two decades. If you own a handgun for personal defense and are interested in developing practical skills in an efficient way, this is video is one that you need to watch!

Safe & Efficient Presentation from the Holster while in a vehicle:

During our Advanced Pistol Handling courses (several of which are offered during the 2016 PDN Training Tour), we cover many unorthodox shooting positions. The selection includes shooting while seated and we usually get students into an actual vehicle on the range to practice the application of the skills in context. This video shows the proper way to cross your body with the gun after it comes out of the holster, as it is moved into a shooting position through the window on your weak side (Driver’s side for right handed shooters, passenger’s for left).

Reality Based Training with Live Fire:

Too often, the term “Reality Based Training” is misused to refer only to training done in scenarios with role players and protective gear. The truth is that ALL of your self-defense training should be “reality based”… including your live fire training sessions. This video also shows an at-speed demonstration of multiple threat engagement in a simulated 360 degree environment from concealment. 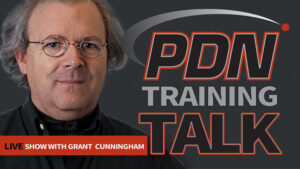 PDN also recently launched a twice-per-month Live Show with long-time Contributor Grant Cunningham called “Training Talk”. On the 1st and 3rd Thursday of each month, Grant will update you on the latest offerings from PDN, discuss Current Events in the self-defense world and give you his opinion on several important training topics. 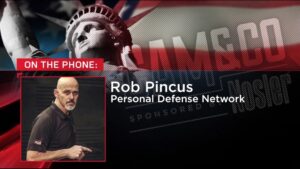 I was asked to join Cam & Company on the NRA News Channel to discuss a recent offensive article published at Gawker.com in regard to a surge in interest in being responsibly armed by older Americans. If you missed it, it should be posted to their website by tomorrow afternoon at the link above!

Keep an eye out for more frequent LIVE broadcasts from classes and events in the future, especially throughout the 2016 PDN Tour. Subscribe to PDN’s Periscope Account, streaming videos at my Facebook Page and be sure you are registered for the Free PDN Newsletter to learn about our monthly Live Hangouts with featured guests & the latest Training Talk Episodes to be sure that you don’t miss out on notifications.