After you successfully defend yourself, will your attacker be characterized as a victim in the aftermath of a defensive gun use? 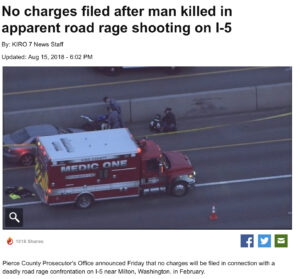 I read a story this morning about a woman in WA who is being victimized by her community memorializing a man who physically attacked her on the side of the road earlier this year as a victim of “handgun violence”.  At I.C.E. Training Company and through Personal Defense Network, we have long sought to education people about the importance of preparing not just from the crucial moment of physical defense, but also for the aftermath.  The story, posted at rallyforourrights.com, is one every gun owner should read.

The aftermath of a physical fight might bring more trauma than the fight itself did. Obviously, the imperative focus when threatened with lethal force is winning that fight to survive. That’s what Aubrey Bowlin did on Feb 8th of this year when Bruce Jones apparently blocked her from continuing to drive on her motorcycle and then attacked her because he didn’t like something about her actions on the highway. The I-5 corridor in Washington State can be a very frustrating path to drive, but not so much so that it justifies a lethal attack. The authorities found Audrey’s defense with a firearm to have been justified, but the community is now accusing her of “handgun violence” in the aftermath of her defensive gun use. She tells the story of the incident in this video. The political issues and the manipulation of terminology is something everyone who cares about gun rights should consider in the big picture, but as a person carrying or staging a gun for defense the effects of the politicalization of your righteous defense can be acutely important.

Are you preparing for the aftermath of defending yourself? Have you even thought much about what Tony Blauer calls “Fight 3”? Fight 3 is where you deal with the potential emotional, financial, criminal, administrative and social  issues that can stem from the actual physical conflict… and they can be damaging. Preparing for the aftermath in a variety of ways is important. Legal and emotional issues are probably the most daunting aspects of the aftermath of a defensive gun use. Organizations including the USCCA, ACLDN and CCW Safe all offer quality programs to educate gun owners before a conflict and assist with the costs of legal defense afterwards. Walk the Talk America is working to raise awareness inside the gun community in regard to a variety of mental health issues, including PTSD. They are also developing programs to assist with pre-incident Trauma Mitigation.

The key to surviving any conflict is preparing ahead of time. Don’t let your training and planning stop at the trigger press… you’ll still have a lot to deal with in the immediate and long term aftermath of a defensive gun use.