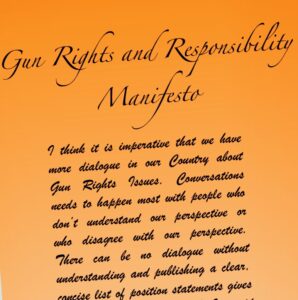 Yes… a  damn Manifesto!
It’s the right word… I checked three dictionaries, including one actual paper one!

I think it is imperative that we have more dialogue in our Country about Gun Rights Issues. Conversations needs to happen most with people who don’t understand our perspective or who disagree with our perspective. There can be no dialogue without understanding and publishing a clear, concise list of position statements gives us a solid starting point. As I accept a leadership role in the Second Amendment Organization, I thought it was important to publish a thorough list of Position Statements on gun rights and responsibility issues.  By sharing our thoughts on these important issues clearly, we invite dialogue. We invite questions. We even invite challenge… and we know that it’s coming. These positions can be found at gunissues.com.

Rather than be reactive and put out statements only when issues are “in the news”,  Second Amendment Organization intends to be Proactive in the fight to increase support for the Second Amendment, the Expansion of Gun Rights among responsible citizens and decreasing Gun Negligence within the gun community.

The world of Gun Rights in the United States has changed dramatically over the past few decades… and it has changed for the better. Three decades ago, there were still over fifteen States where citizens did not have the right to carry a concealed defensive firearms. Two dozen years, ago we were placed under the most oppressive gun ban this country has ever seen. Even a decade ago there were still two States where getting a Concealed Carry Permit was illegal.