We see a lot of news stories about people protesting against or worrying about “Gun Violence”. Most often, this is from what would clearly be considered the Anti-Gun side of the issue in the United States. Witty Pro-Gun people sometimes remark that we also are very much against “gun violence”.  A less intellectually engaging, but still appropriate response might be that we should all be against all forms of “violence”.  At the far end of the spectrum are Pro-Gun people least likely to actually win anyone over to our side who want to beat their chest and remind everyone, accurately but needlessly at this point, that “Violence is Sometimes the Best Answer”.  This week, I’m more concerned about how gun owners feel and act about Gun Negligence. I made two long social media posts this week, both of which were met with  almost universal support from my (somewhat cultivated) audience and with a tiny amount of fear and derision from within the gun community.

4/24/18: Prompted by the outcry to hold the father of the Waffle House Killer in TN criminally responsible for giving him guns. 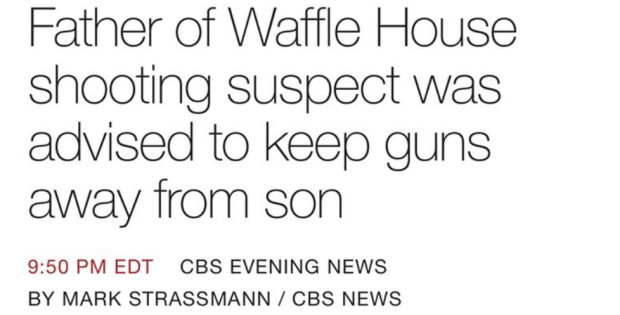 While we are all talking about how the Father of the Waffle House shooter should face charges (and he certainly should!), take a moment to think about who YOU might know that should be talked to about their access to firearms.

Friend with a drinking problem that insists on carrying a gun all the time?

As Firearms Owners, particularly those of us interested in the defensive use of guns, we need to be braver as a community about confronting those people in our lives who might be needing a conversation about responsible ownership, training or doing without guns in their immediate control, at least for a period of time.”

4/25/18: Prompted by a story about an instructor who injured THREE Students while trying to “teach them gun safety”.

“Gun Violence? How about we protest against Gun Negligence? 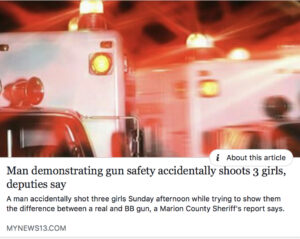 As a community, we need to be Much More Assertive about policing our own. I’m tired of hearing that, by pointing out that some people shouldn’t own guns, much less carry them in public, we’re “giving ammunition to the anti’s”. Let’s keep in mind the concept of the Cover Up being Worse than the Crime.

I’d rather give The Earth some valid figurative ammunition and have them understand why Education about Gun Safety in Public Schools is common sense than give real ammunition to an overconfidence and under skilled gun owner. It’s okay to admit that some people aren’t ready for Concealed Carry and that some aren’t ready to own and operate guns on their own. I gave some obvious examples in a post yesterday… and I was pleasantly surprised to see how many people “got it”. The contextual reference of the father of the waffle house Killer makes my point pretty obvious: Like Freedom, Free Speech and all the other Rights protected or granted by The Constitution, the Right to Keep and Bear Arms must be exercised responsibly and can be sanctioned. We shouldn’t need to “prove” that we deserve these rights, but we absolutely should vehemently protect them by engaging in and promoting their responsible exercise. That starts by not being afraid to call out the incompetent, negligent and/or reckless amongst us.
There is a world of difference between “should not” and “should not be allowed to”…. if we aren’t comfortable pointing out the former, there are people lining up to enforce the latter. Too many people afraid of responsibility or accountability will ask “who am I to judge?”…. which is nothing more than abdicating the judgement to someone else. If you See Something, Say Something. Fight irresponsible or negligent gun ownership.

I am a staunch proponent of “Constitutional Carry” primarily because it should be the obvious interpretation of the 2nd Amendment… I have also seen the positive effect it has on promoting training and continuing education inside the firearms community. When you don’t tell people they are “trained” after a worthless class, common sense drives them to seek out training. Once freedom is in place, people worry less about slippery slopes and they encourage others to seek training as well.”

Both of these posts get to the point of the title of this blog:

“Responsible Gun Owners need to get more Assertive about Policing our Own.”

I have long said that I am much more interested in educating gun owners to be better prepared and more responsible than I am in trying to change an anti-gunners mind… but, let me tell you a secret: If we gun owners were generally more responsible, there would be fewer anti-gunners. Furthermore, the anti-gunners that were still around would have much less to point at in regard to tragedies and negligence.

Author and Gun World Pundit Grant Cunningham had this to say when sharing one of those posts his audience:
“I’ve taken the keys and driver’s license away from an elderly parent who could no longer drive safely. I’ve also removed firearms from that parent’s home, for the same reason. Yet, for some reason, too many people in the “gun culture” see those as two separate situations, one they’d be willing to do and one which they’d hesitate to do. I take the possession of firearms seriously, and I encourage others to do the same. Not just for themselves, but for the people around them as well. Sometimes we need to “police our own”, and as I’m fond of saying: If we don’t do it, someone else will — and we won’t like the results.” 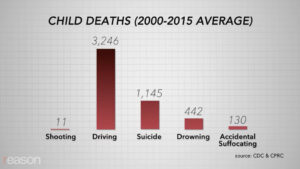 Also this week, Deryck Poole shared this fact chart, showing that people interested in protecting kids have more important things to worry about than school shootings. Again, if we focus on Policing our Own, it is apparent that have a lot of work to do inside the world of the legal gun owners when it comes to protecting our kids from the danger that firearms can pose. We are just as pre-occupied with the sensationalism of school shootings. I believe that less talk about Arming Teachers and more talk about responsible carry, staging and storage of firearms is in order? According to one set of statistics provided at what I consider to be a politically neutral website:

Of course, you can find a plethora of stories in the main stream media about gun negligence. A simple Google search of “accidental deaths firearms kids” found these stories from CBS, Newsweek, USA Today, National Review, and CNN . Regardless of the political leaning or agenda of any of those publications, there are far too many examples of firearms negligence and irresponsible ownership underlying their stories.  Just this month a 5 year old found a gun owned by a concealed carry permit holder and started playing it. He killed his 6 year old brother. On the same day, a mother shot her sleeping 5 year old daughter.

year, an armed homeowner mistaken as a threat was shot by a responding Police Officer in Pennsylvania and a man was sentenced to over 8 years in prison for accidentally killing his neighbor while firing a gun negligently at a man who had just stolen his truck as he was driving away.  In cases like these, it’s the tactics and techniques involved in the use of defensive firearms that must be addressed.

The Education that we need as firearms owners and the standard that we should be holding each other to goes far beyond an overly simplistic set safety rules, a gun lock shipped with every gun or a mostly-worthless required course for a CCW Permit. We need a cultural shift to worry less about the politics  and more about the responsibility. We need to be less afraid that we are “giving the anti’s ammunition” when we call out bad actors and sanction irresponsible gun owners and more worried about the next tragedy that occurs when we don’t speak up. As I mentioned in one of the social media posts, I am far too often reminded of the idea that the Cover Up is Worse Than the Crime when I think about how we sometimes react by downplaying the dangers of irresponsible firearms ownership or fail to capitalize on learning opportunities presented when accidents do occur or mistakes are made. True Stories of guns being discharged at gun shows or in gun shops are often only shared in hushed tones. Negligent discharges at large trade events are sometimes swept so far under the rug that those bringing them up a few years later are often accused of making them up or spreading rumors! A few years ago, after a gun was accidetnally fired in a booth at the Great American Outdoors Show, I heard that representatives from a pro-gun organization was going around asking all the other vendors in the area not to talk about the incident on social media or otherwise, with threats of not allowing them to attend the following year if they did! The facts of these incidents being shared can educate others so that these mistakes might be avoided. If nothing else, talking about them is a reminder of the risk involved with gun ownership and gun handling… which should encourage education.

Join me in the fight against Gun Negligence. If you see something, say something. Yesterday, I had to tell someone that I thought they shouldn’t carry a firearm in public until they got more training and practice with their gun. There is a huge difference between “should not” and “Should not be allowed to” when it comes to the right to own and carry firearms. The former is common sense, the latter is a legal restriction. It is not easy to hand someone their gun in pieces and tell them (in front of other people) that I honestly think they pose more a danger to themselves or others by carrying a gun than they stand a chance of successfully defending themselves with that gun. I am passionate about firearms education and the preparation for personal defense. I have spent over two

decades working in the firearms industry and been a full time educator in this arena for over 15 years. I gave that man my informed opinion. I hold no power of law to enforce my opinion, I didn’t “turn him in to the authorities”, I didn’t steal his gun… But, I did take a pretty dramatic action to ensure that he and others knew what my opinion, as an educated and experienced firearms professional, was. My organization also offered to provide further education and guidance in the very near future. We did what we thought was right as responsible members of the firearms community. I hope you will dedicate yourself to doing so as well. I often hashtag “With Rights Come Responsibilities”. I think that we all need to be “Responsibly Armed”. Two years ago, my company chose as the motto for our annual Training Conference (and thus the theme for the following year) “Ius et Onus“, translated as Rights & Responsibilities”.  In 2017, our motto was “Veritas et Utilitas”… “Truth & Utility”. If you know the truth, but you don’t use it or share it with others in a way that can help them, you aren’t doing your job.

Personally, my mantra of late has been “Protect What You Love“. If you aren’t encouraging all the gun owners you know to be responsible ones, you may very literally be endangering yourself and those you care about… you may also be endangering our right to keep and bear arms.