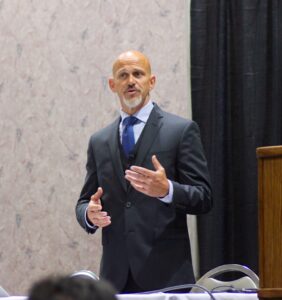 As hundreds of people were filling the room for my presentation on Saturday at the 145th Annual NRA Convention, I was sitting in the front row tweaking the Power Point. I had decided to spice things up a bit by adding some Active Shooter Response info to the scheduled Home Defense topic.
The truth is that they are very closely related in regard to the 50,000′ strategic view, so the bridge would be easy. The big difference is that I knew 99% of the audience would believe that there was a HUGE difference because at home those attending the NRA Show would believe that they could “always” have a firearm in their home, but realize that there would be times where that wasn’t possible or practical outside of the home.
That doesn’t change the fundamental of approach in both venues of “Evade, Barricade, Respond if Necessary“. 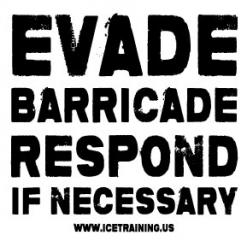 The nature of the response is a tactical issue, not a philosophical or strategic one… but, that isn’t always obvious. I try to be a Power Point Minimalist, as few words as possible, with the bulk of the information coming from my lecture. It was a tip I got one evening after a conference out in California from a nobel prize winner who helps other scientists try to convey information efficiently to layman. I wanted to put something on the giant projection screen that would convey the underlying important concept efficiently and get some attention from a crowd that might react with emotion instead of processing intellectually if I just stated the bottom line bluntly: You don’t need a gun to defend yourself.

In retrospect, what I wrote overshot the mark a bit: “Being Armed is a State of Mind, not a State of Being.” If I were back in that library at the Estancia in a group where the PhDs per person quotient far outweighs pistols per person, it would’ve landed better. After more thought and some consultation with the CFS Instructor Team, the phrase has evolved: “Being Armed is a Mindset, not a physical condition.”
I think that wording is much better. Hopefully, it resonates with you. Too many people who say that they are interested in self-defense and safety spend way too much time worrying about the physical objects that can only help them defend themselves or others. We hear a lot of people talk about the limited resources of money and time when it comes to training. I often half-joke that people who have a safe full of guns and no training certificates need to start selling guns and hitting the range if they want to claim that they are primarily interested in personal defense. I recently had a student in Illinois who did just that. He sold an extra semi-auto shotgun he hardly ever shot to cover tuition, travel and ammo for a two day defensive pistol training course. For some people, the money is easier to come by than the time… yet, they find time for competition shooting or industry events. 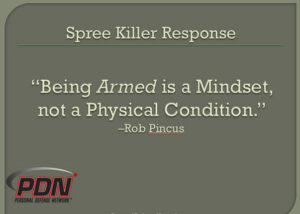 Aaron Israel wrote an article that was partially inspired by these concepts for Personal Defense Network titled “<emAll hat, No Cattle“</em after attending the convention. I know lots of people who have worn cowboy hats and never wrestled calves so they could be branded, road a horse outside of guided trail ride or sat on top of a bull charging out of the chute hoping for a full 8 seconds. I’ve done all those things, but I only wore a cowboy hat once for a costume party. I guess being a cowboy is a state of mind, not a piece of clothing… I think maybe Kid Rock said that.