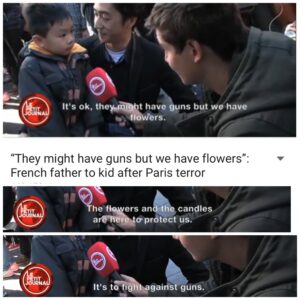 Actually, we have flowers and guns to protect us… and the fight is against Evil, not guns.

Over the last couple of days, the Internet has been all worked up over the viral video of a father comforting his son during an interview in Paris. The father does a great job of addressing his young child’s fears about “mean bad guys”, no doubt. It is a touching moment and many have argued that it was an example of great parenting. The idea that global politics, much less the ugliness of violent terrorism, doesn’t really need to be discussed with toddlers in great detail is self-evident. Still, some people jumped quickly to deride the father for his pacifism, for his denial of reality, for his anti-gun comment, for his naiveté. Several commenters even asserted that “This was why the terrorists are successful!”

Those attacks were, of course, balanced out by the response of the larger percentage of the population of Earth who found the sentiment refreshing and the interview to be a rare glimpse into the everyday kindness of a typical family moment that fills much of the human experience but rarely finds traction in the 24hr News Cycle. Anderson Cooper of CNN is in this camp, taking time to bring the two onto his 360 Show in the wake of the social media frenzy.

There were even some people in ‘gun world’ who feel very strongly about our right to own guns and our responsibility to be prepared to defend ourselves who took time to table those issues to show support for this guy as a Father trying to do the right thing for his Son, without regard for the political or philosophical ramifications. To be honest, I’m with this group… I doubt that guy had any agenda at that moment aside from making his son feel better.
I’m a Father and I understand the need to sometimes not be brutally honest with a child. So, I am not at all interested in debating whether or not that guy did the right thing in the moment… though it will be interesting to see where he goes with his message now that he is the subject of mass media attention. Doubling Down on the “Give Peace a Chance” mantra? Taking a step back and reminding everyone that he was just trying to make his young son feel better, not set an agenda for the world’s response to terrorism? Open an Etsy Storefront with “We Have Flowers” logo items? I have no idea, nor does it matter much. His sentiment is now in the conversation. His words are being repeated in far different contexts than they were originally uttered. 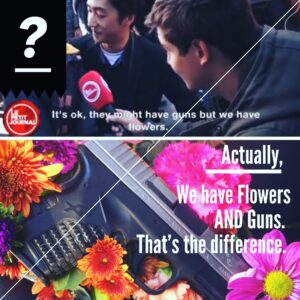 I think it is important to think carefully about how we who are advocates for the individual accepting his or her obligation to fight evil and be prepared to defend themselves should respond to that off-the-cuff message that is now being repeated around the globe.
The real difference between Good and Evil in this case isn’t that they have guns and we have flowers… it’s that they have guns and We Have Flowers and Guns. Flowers, as a symbol for caring, love, pride, honor and a host of other things when laid down at a memorial site, are what inspire Good People to be committed to fighting evil. Flowers that remind us of friends lost to war and crime, people with no personal agenda against Islam who were gunned down at a concert or dinner, armed professionals who place their lives in the line of fire every minute of every day. Flowers cause us to think about those we love and what we might do to defend them. Flowers that remind us of the good in the world that Evil would trample over for its own personal gain or selfish satisfaction. Flowers that wouldn’t be recognized by those who are mentally ill, delusional or otherwise incapable of emotions that keep them operating within the behavioral boundaries of civil society.
Those flowers underlie the responsible ownership of defensive arms. They inspire people to think about safety, security and preparation. They inspire people to protect themselves and, especially, those they care about. They inspire Good Nations to go to war against Evil States.