The Springfield Armory XD-S in 9mm was definitely my most anticipated gun of 2013… which is why I am so disappointed that it isn’t perfect. It’s good… maybe great for some… but, not perfect. 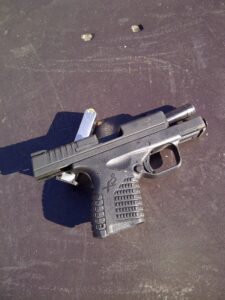 I finally got to start spending time on the range with my copy in July… but, I was already hearing about hiccups from several other instructors whom I trust. When I test fired a couple of magazines through the gun at SHOT Show Media Day back in January,  I learned that I rode the slide lock on the gun and that it probably wasn’t going to be a primary choice for me in regard to defensive carry… but, I still had high hopes that the gun would be a good choice for others, especially those with smaller hands. The slim 9mm is a great concept for many people who don’t want to have to dress around their gun and the XD Series of firearms is known to be efficient and reliable. In this model, they also corrected the issue of the slide not moving when the grip safety isn’t depressed, which is  a huge move forward for them. The grip safety has always created an asterisk on the recommendation of XD’s for those whose hands they happen to fit very well.

As soon as I started shooting the XD-S, I ran into the same problem with slide lock. Of course, this isn’t an inherent design problem with the gun, it just meant that it wasn’t perfect for me. FWIW, however, I have heard

may others report the same issue. Perhaps a smaller profile slide stop will be in the gun’s future?

As for shooting, the gun ran flawlessly under its own power… and that is the real test of a potential defensive firearm as far as I am concerned.  I even included a mention of my testing the gun in 2013 PDN Tour Update #12. After running about 400-500 rounds through it (some of which were fired by other people during training), I decided to formally run my preferred Defensive Firearm Torture Test for reliability:

200 Rounds of FMJ Immediately followed by 50 rounds of hollow point defensive ammo. Because the timing worked out, I taped this test for a future Personal Defense Network video as well. The gun ran through 200 rounds of Winchester white box without a glitch. I loaded up 3 magazines (2 standard, 1 extended) with Winchester PDX1 (my personal preference for defensive HPs), inserted one and racked the slide as I was talking to the camera about the continuation of the test and why it was so important to test a defensive gun with actual carry ammo. In fact, last year when I got my new Glock 26L, I wrote a short article that included a reference to my 100% Reliability requirement with HPs. As I was finishing my sentence and I released the slide, I felt the hiccup… the gun did not go into battery. I looked down and saw that the slide had moved forward about 1/4-1/3rd of an inch and that the front of the bullet was resting on the feed ramp. The XD-S 9mm had failed to feed the first round of the HP test. I was seriously disappointed. Being human, I immediately hypothesized that I might have failed to rack the slide properly… maybe I didn’t pull back fully? Maybe it was the odd angle I was at while talking to the camera, but keeping the gun pointed downrange? Maybe I left my hand in contact with the slide as it started moving forward?  Maybe, maybe, maybe… but, there I was with a gun that didn’t feed the hollow point.

I commented to the video camera about the failure (eventually, you will see the vid at PDN…) and I  had someone take a couple of still pictures and then I got cleared the gun and started over. All 50 rounds round perfectly. I even stacked the rest of the test as much “against” the XD-S as I could… maxing the smaller magazines  (which should have the most pressure required to chamber the first round) and increasing the number of reloads with them by downloading the extended mag. Under its own power and during all of the other reloads the gun ran fine. So, the big question: Does the 50 round HP Test with 100% reliability start after the gun is first fully loaded with the ammo or as gun is being loaded with the first rounds? I never had to think about that before. Also, it is important to note that another shape HP may not have had that hiccup. But, that hiccup was there. XD’s just can’t get away from having an asterisk on my recommended defensive gun lists!

Based on reports from other instructors and the one failure to feed, I can’t put the Springfield XD-S 9mm on the same level as a full size Glock, M&P or even the full size XD series guns. It shot very well, it feels good in my hand, others have performed well with it and it almost went through the 250 rnd torture test perfectly… but, almost doesn’t count in defensive handguns. Personally, I will not be considering the XD-S a carry option. I’m going to keep an eye it, bring it to the range for students to shoot and I might even shave the slide stop down a bit and keep shooting it myself at the range.

I like the idea of the single stack compact 9mm for high concealability and carry comfort with a reasonable amount of capability when the gun is actually needed, but I’ve yet to be incredibly impressed with any of the offerings in the category.